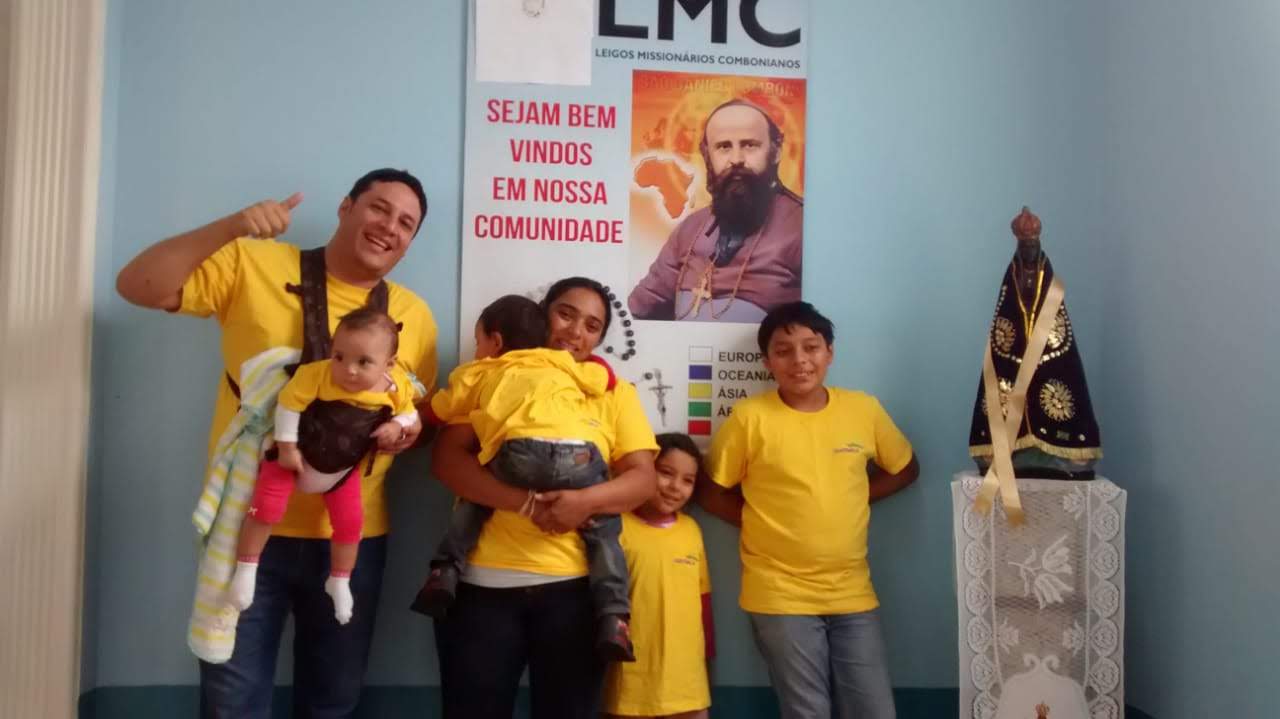 We leave you the interview by Fr. Dário (provincial of Brazil) to our CLM couple from Guatemala, Ana Cris and Alejandro.

In it they present their missionary experience in Brazil.

Today’s challenges remind me of those of Comboni. They are not the same. Of course, in Comboni’s time they were much more difficult. The desert crossing, the various diseases, the fevers, the broken arm that had to be broken again to put it back in place (I shudder just to think of it), etc.

But now we are also living in a time of desert. The expectation of the trip to Africa, the sending of documents, the pandemic, the wait for the vaccine, the request for renewal of documents and the wait again. All for a greater cause, which is Jesus.

But through it all, I can’t complain. I was welcomed with great affection and the work is producing results.

After a stop for life: because the virus does not mess around and we value the welfare and life of our people, the people of God. Little by little, and following all the WHO guidelines, we are resuming some pastoral work.

We have restarted the adult and children’s choir, but with only two members at a time. (photos of the rehearsals).

The catechesis is done online to preserve the health of the children. The participation is very good, even in spite of some difficulties such as the lack of Internet in some families. So that these children are not harmed, we have chosen to visit them without entering their homes and without them going out. It is a catechesis from the door of the house, in the street, without physical contact, without proximity.

Group of catechists from the community of Nossa Senhora Aparecida (Ipê Amarillo neighborhood).

We have resumed the liturgical formation with the team of the community, since there are few people, we do it in person without forgetting the care.

We participated in the triduum of the martyr Fr. Ezequiel Ramín, together with the parish and the parish group of Comboni spirituality.

We have made and participated in some videoconferences.

In the coming days we will celebrate the national week of the family in the parish, the catechesis meeting with the confirmation group, in addition to the existing works.

A few days ago I discovered a new hidden talent (laughs), I discovered myself as a wall painter. Together with the Camey family from Guatemala, we painted the façade of the Comboni House. Modesty aside, it looks beautiful!

In social work we are together registering and distributing baskets of basic commodities. This is a collaboration with the diocese. These baskets come from the fine that the mining company Vale paid for the Brumadinho disaster.

And so we continue the mission in the way the Lord presents it to us.

It is rewarding and I can say with certainty that I will miss Ipê Amarelo, its people and especially the children.

The diocesan center of the diocese of Bologna organized a meeting on the VI chapter of Fratelli Tutti in connection with Emma Chiolini (CLM in Brazil).

Here is the interview with her testimony (in Italian) 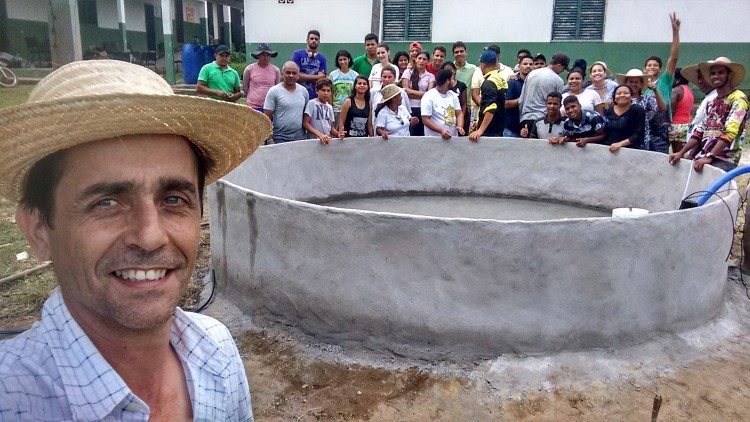 The Center for Rural Innovation and Agroecological Development (Ciranda), offers theoretical and technical training in agroecology to 70 families in the city of Açailândia as an economic alternative to the region’s mining and agrobusiness chain, which is located right in the middle of the “Estrada de Ferro Carajás” (EFC) railroad. According to coordinator Xoán Couto, the Brazilian project is inspired by Laudato si’ because it follows the same path that unites faith and science in “response to the needs of communities, also taking into consideration traditional knowledge.”

The Ciranda is part of the cultural heritage of most Brazilian children. It is a song with a dance in a circle reminiscent of the wives of fishermen in the northeast of the country who sang while waiting for their husbands to return from the sea. It is a community dance, always awaiting “the other”, just like a project developed in the city of Açailândia, in the state of Maranhão, in the middle of the Brazilian Amazon.

A development project since 2018, Ciranda – an acronym for the Center for Rural Innovation and Agroecological Development – has bet its efforts on agroecology as an economic alternative to the mining industry and agribusiness in the region, located right in the middle of the “Estrada de Ferro Carajás” (EFC) railroad, which connects the largest open-pit iron mine in the world, in Carajás, southeastern Pará, to the Port of Ponta da Madeira, in São Luís, Maranhão.

Integral ecology thus emerges as a concrete possibility so families do not have to depend only on mining, but are able to safeguard the local economy, generating income at home with less impact on the environment. Ciranda’s coordinator, Xoán Carlos Sanches Couto, a Combonian lay missionary, explains the relationship with our common home, which can be adapted to the reality of each person: “Ciranda promotes the right technologies for family farming and farmers. Here we test and apply technologies and forms of production that are appropriately adapted to the property size of farming families, their knowledge, the workforce they have among their families, and the environment we have in this region.”

Xoán is a Spanish agronomist who has been in Brazil for 20 years working with families in the Amazon region of Maranhão. In the beginning, he created the “Casa Família Rural,” a type of community agricultural school to help improve the lives and education of rural youth. Today, together with Ciranda, he runs two projects that help 70 families in the region with theoretical and technical training.

In the courses offered, the children of farmers learn to familiarize themselves with ways of growing agroecological crops with the possibility of producing them on their own properties. These are technologies suitable for family farming that, once learned in school, are passed on to families and communities offering an ongoing series of incentives not to leave the rural environment. This is one of the prime examples coming out of Brazil, an initiative that does not solve global problems, but confirms “that men and women are still capable of intervening positively” to help improve the environment (Pope Francis, Laudato si’, 58).

The idea of working in agroecology, says Xoán, “is very much inspired by the Laudato si’ Encyclical. It is a crossroads of science and faith, which seeks the best that science has discovered to explain the environmental crisis, to provide answers with faith, but also with a scientific foundation. The Ciranda Center also takes the same approach. We use scientific knowledge, we have partnerships with research institutes and universities, but at the same time our response is based on the needs of communities with respect to traditional knowledge as well.”

Xoán gives examples of the techniques taught, ranging from green building, a traditional form of construction widely practiced in the region with clay and tiles made of recycled materials, to biogas production and rainwater harvesting with cisterns. But poultry, fish and beekeeping are also practiced; pigs are raised outdoors and agroforestry systems are promoted through planting of wood and fruit trees, as well as annual crops that are the residents’ food staples, “such as corn, beans, cassava. All this is planted together in a form called polyculture, where there is no monoculture and one species supports the other, so you have a balanced environment: it is very unlikely that a pest or insect will attack and cause economic damage. So this is a way to take inspiration from nature that also has a scientific foundation.”

Ciranda’s challenges: from fires to agribusiness

Despite the positive outcomes, there are challenges, like the fires that come from neighboring properties. Xoán says that in all, they manage to save the permanent crops, but their other efforts in areas like ecological grazing and forest reserves are often severely damaged by the fires. This has been in the case in the last two years: “this is a challenge that makes us think about how to overcome this problem in the coming years by building forest barriers that are less susceptible to fire. Even so, the results are already promising: we see in the families an enthusiasm and willingness to continue working the land, knowing that this is a mission to provide food for humanity and this can be done while preserving our common home, without damaging the environment”.

Cooperation with nature is already very present in the lives of most farmers. Yet not everyone has this awareness, because agrobusiness is very present at the local level, “transforming economies, landscapes and mentalities.” As the Pope writes in Laudato si’ (54), “economic interests easily end up trumping the common good” and “any genuine attempt by groups within society to introduce change is viewed as a nuisance based on romantic illusions.”

Xoán is fully aware of how Ciranda is an experience that “profoundly contradicts the notions of the capitalist market, where those who have more and those who make more money are worth more.” For this reason, he explains, many times “families tend to be ridiculed or dismissed, by saying that their approach does not work and this cannot feed humanity. But we already have several research studies that show how, for example, one hectare of agroforestry, which is the method we work with – the agroforestry system, is more productive than one hectare of soy monoculture. This is not only in monetary terms, but also in ecological terms. So, dismantling this ‘money mentality’ is one of the challenges we have and will be working on in the coming years.”

Today the CLM community of Ipê Amarelo Nova Contagem Minas Gerais celebrates the 14 years of Ana Cris and Alejandro’s marriage. May this date repeat itself for many and many years and may they and their children continue this beautiful missionary journey, always with the intercession of Comboni and the blessings of God and the Virgin Mary.