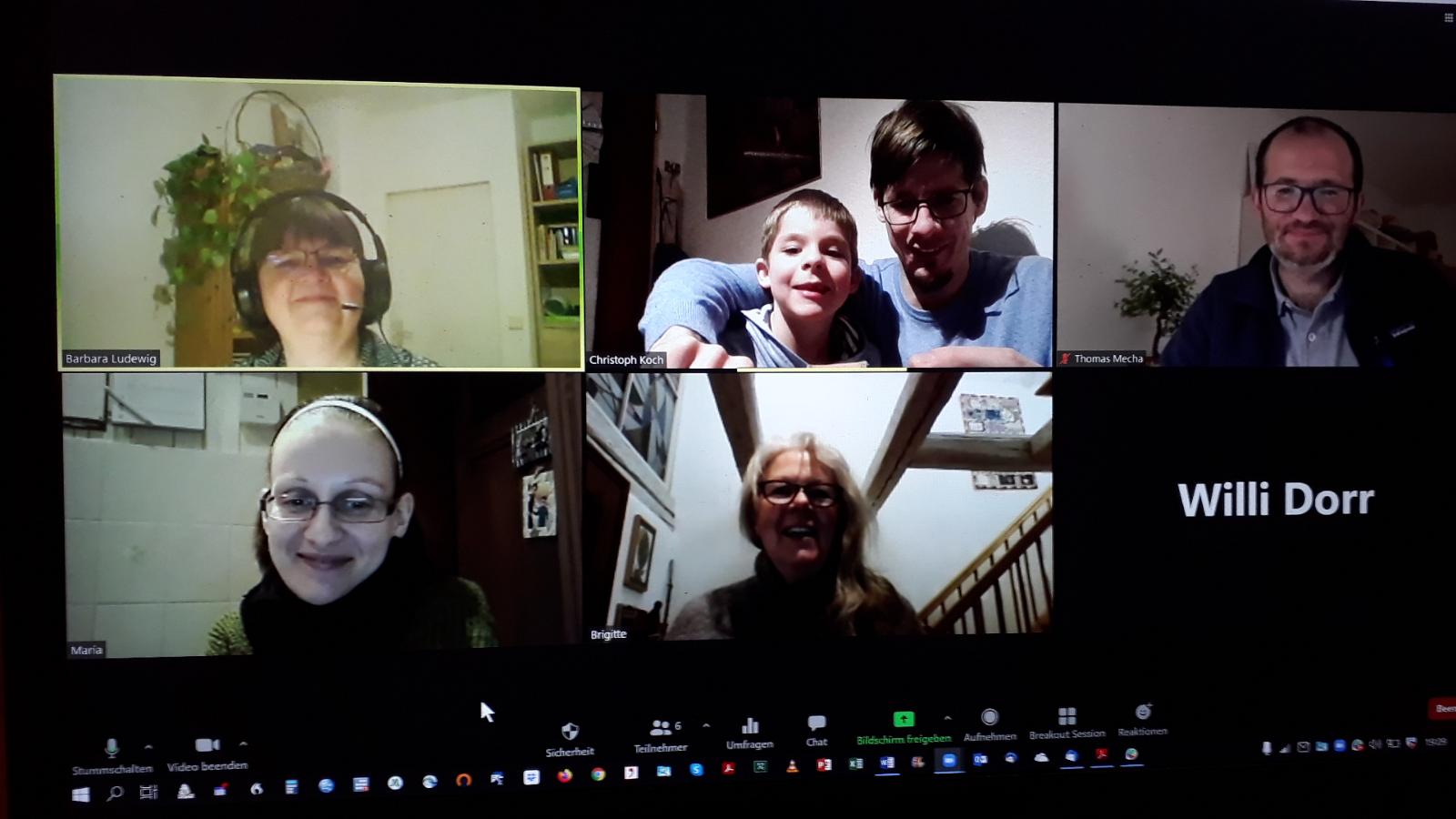 We continue our work of creating posters on the different ways to resolve conflicts peacefully. The posters will be used for the mission animation of the CLM and the MCCJ. We were able to finish one more step and plan the next steps. For the celebration of 100 years of “Comboni presence in Ellwangen” we intend to use the posters for the first time.

Furthermore, we prayed together and exchanged our missionary and personal experiences during the last weeks. 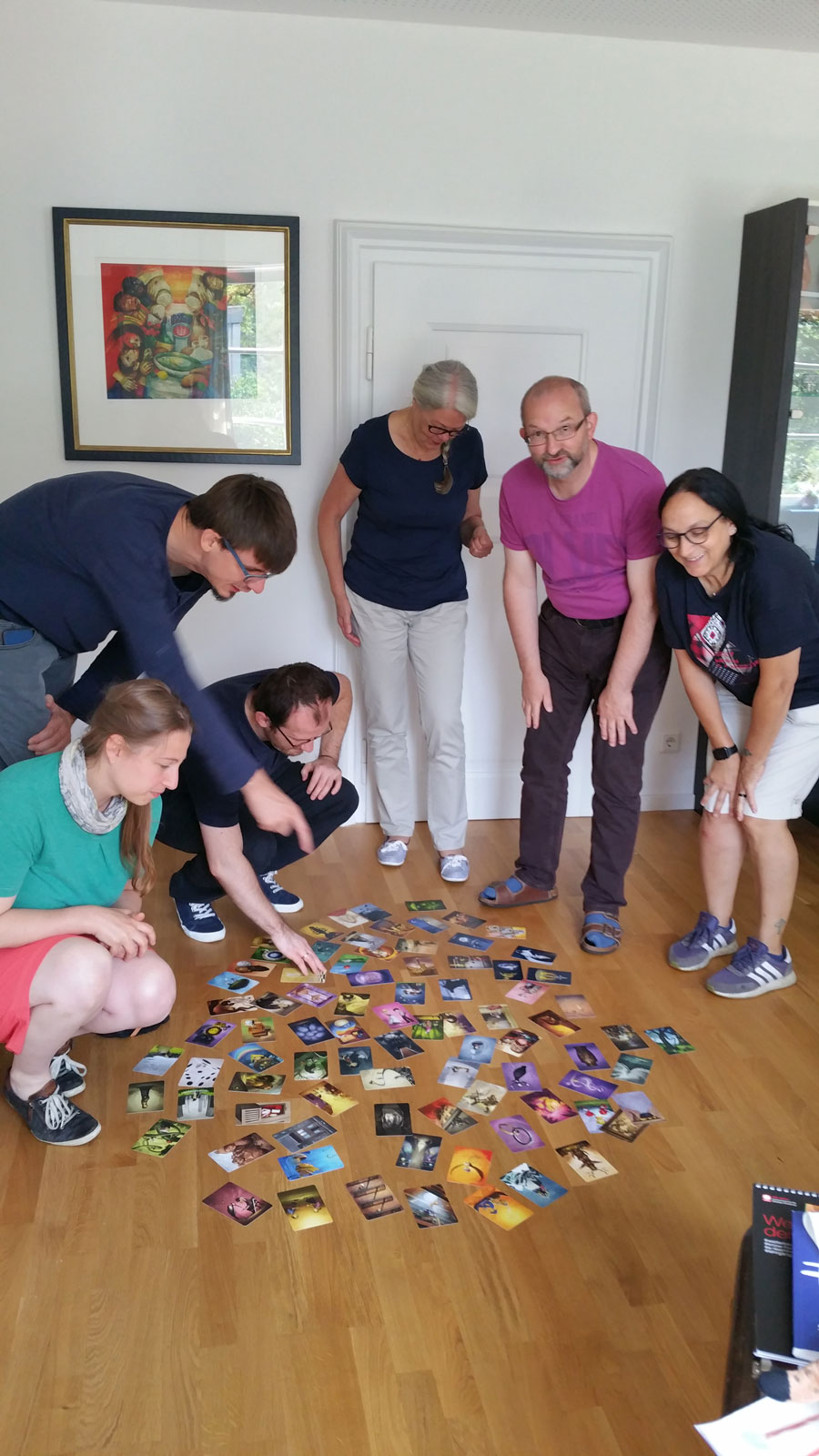 Our July meeting was determined by three things: continuing our work with the peace posters, participating in the zoom meeting of the CLM in Europe and sharing spiritually and personally with the MCCJ community in Nuremberg.

For the work on the peace posters we have improved and closed more clearly the scheme that links the posters. We also decided on the steps of this project until the end.

The participation in the meeting through zoom gave some of us the first possibility to feel personally the internationality of the CLM movement. The representatives of each country spoke about the challenges of the “mission in Europe” in the context of their country and how they try to respond to these challenges.

Together with the MCCJ and the Pauline Sisters we prayed for vocations, celebrated Mass and cultivated unity in a “grill” party.

After the long break due to Covid 19, this meeting did us all a lot of good. 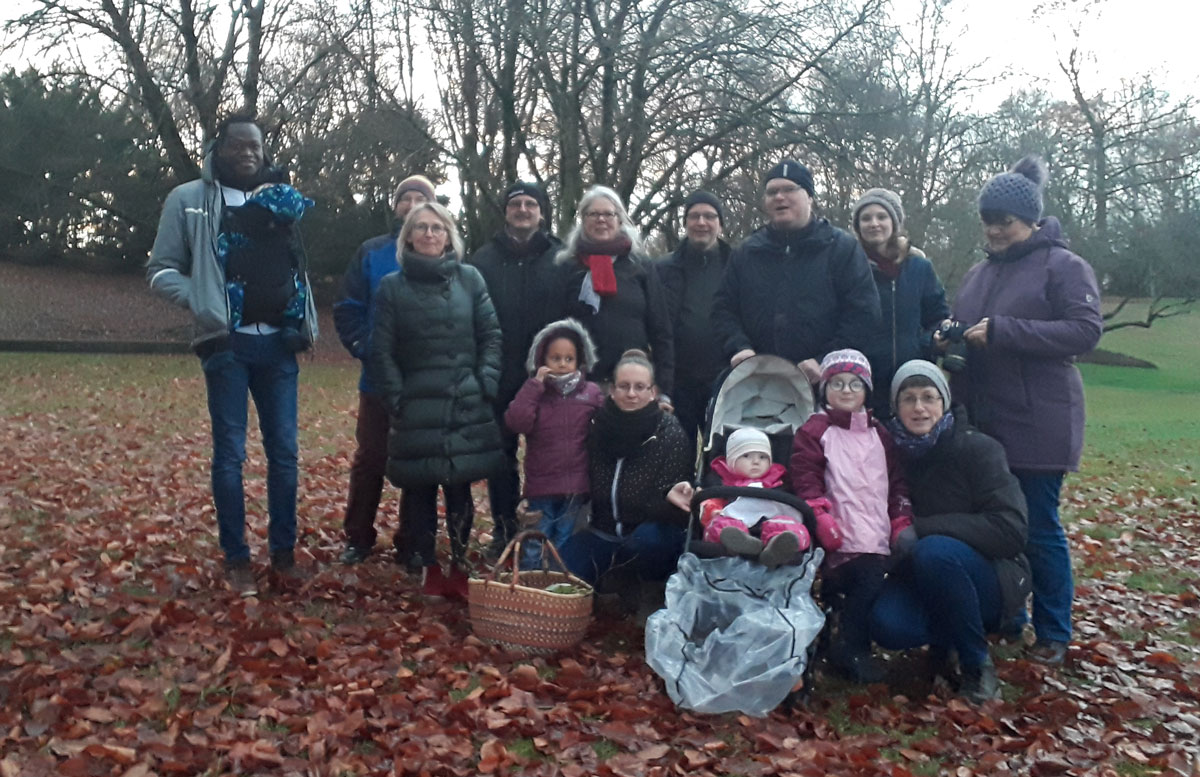 One year after the general assembly in Rome and the greetings of Pope Francis we celebrated with the Comboni-Family the Comboni Lay Missionaries movement day together with volunteers in the global south and north, who decided to be inspired by Saint Daniel Comboni, strengthened by a movement of lay Christians and lifelong dedicated to spread the good news of the Gospel.

We started with a World-Cafe with statements from Pope Francis about mission today, mission in shrinking communities, mission in post-colonial Europe and in times of global climate change. Those arriving had the opportunity to comment on selected statements at several tables. The idea was to exchange ideas in several small groups at parallel tables.

Afterwards, a short video of the Pope’s greeting in Rome in December 2018 (compiled by Christina from Brazil) and the greeting of the Central Committee of the Comboni Lay Missionaries were read out partly as an introduction to the feast. It dealt with the reading of the third Advent and the joy with which the gospel is to be proclaimed as well as the growing together of the CLM nationally and internationally. The new international logo of the Comboni Lay Missionaries was presented. This was the result of a cooperative process last year and was selected from several proposals.

The word service was initiated by a “search order”. Those present were invited to collect various objects during a walk, from which a crib should then be designed. Thus, the current times and the past were brought together as well as aspects of global integration and injustice, pollution and mission today. The two MaZ-in-service, the returning MaZler *, the CLM international and the numerous Comboni friends, who had responded to the invitation but unfortunately could not be there, were included in the prayers.

The feast continued in the dining and living room. A “shepherd’s meal” was prepared there. This again illustrated the upcoming Christmas. Thanks to many helping hands, there was a delicious, social get-together, rounded off with cake and children’s Christmas punch (as two families brought their four children as well). During the evening and the following day, congratulations and pictures came from CLM celebrations in Mexico, Kenya, Guatemala, Portugal, Spain, Egypt, Italy and from Rome were shared live via WhatsApp while the feast. 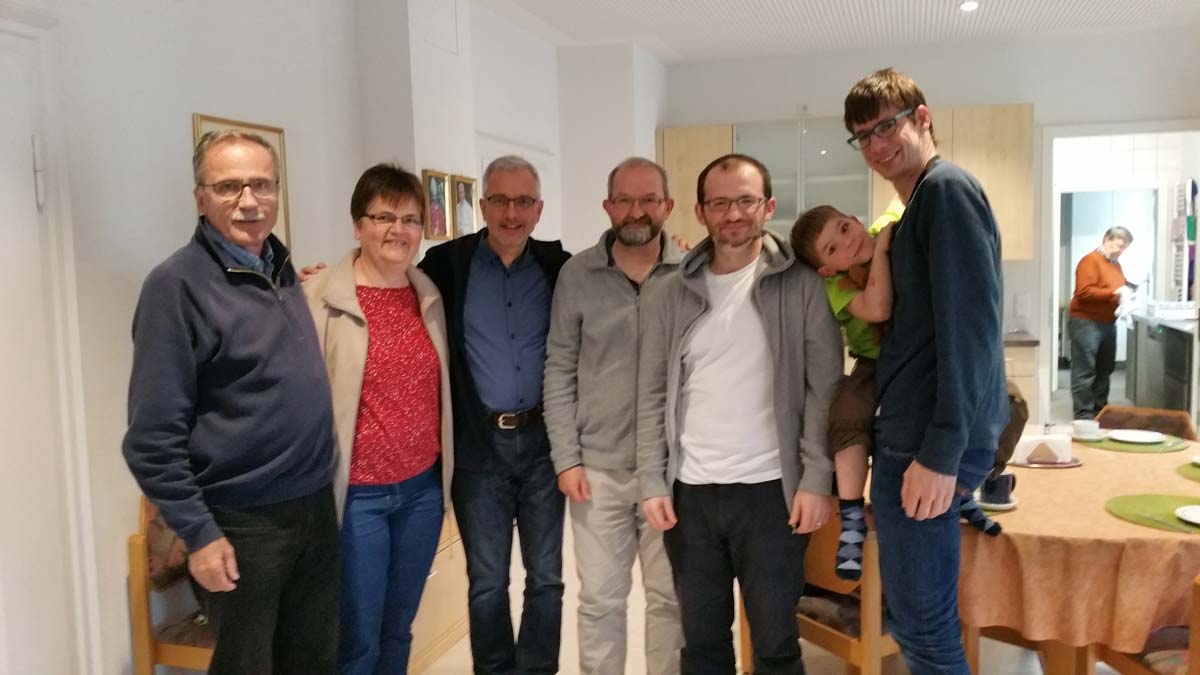 At this meeting we enjoyed the presence of Thomas Mecha, who up to 2018 worked as an AGEH agent in Burundi in the diocese of Bururi in the field of Peace Development. There are over 2,000 basic committees who work in mediation and arbitration of land and family conflicts – an enormous potential! The report by Thomas and the debate that followed were very interesting and inspirational for us and for our activities in building bridges of peace.

We also worked on the CLM logotype at the international level, we received information from other CLM groups and we agreed on some monthly activities to improve communications.

Also very pleasant was meeting again with the coordinating team of the Province (that was also meeting) and with Fr. Juan Goicochea of Peru.

Thanks to Thomas, Bro. Hans, Father Günther and the community of Nuremberg! 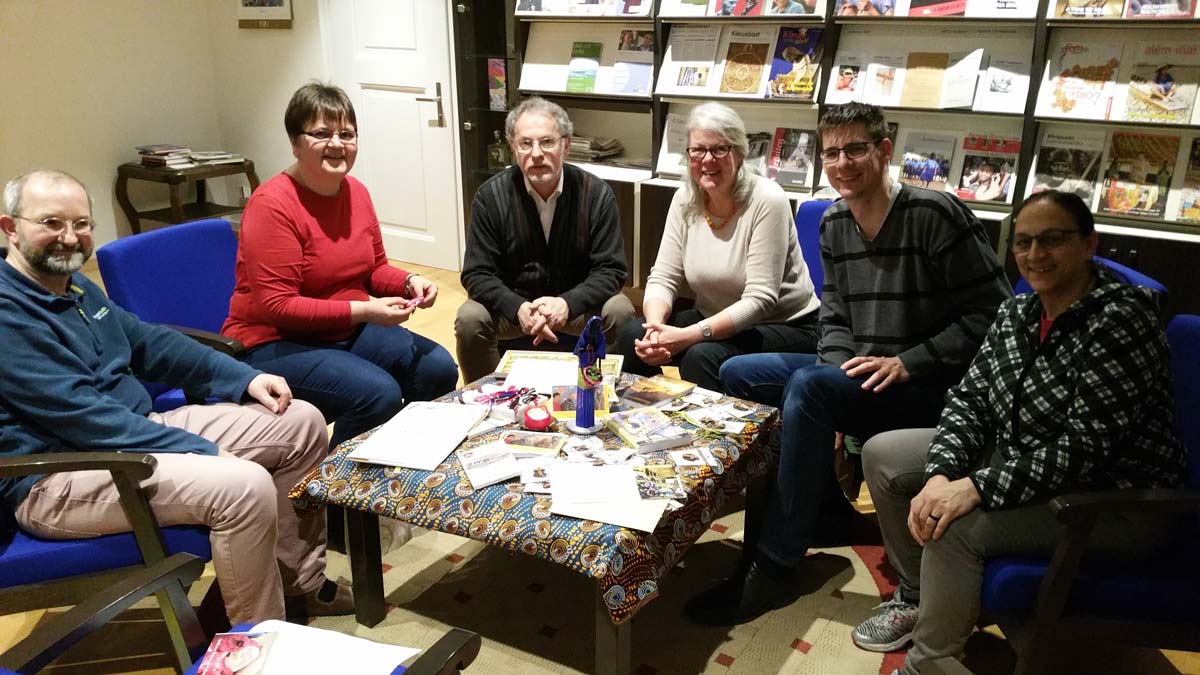 The richness of the CLM groups is their variety

With still great vigor and enthusiasm Christoph, Fr. Günter and Barbara told us of how they experienced the general assembly of the CLM in Rome. It was great to be present and meet the CLM of the other 19 countries/provinces, to share and to pray together, to discover what is most useful in our future development and what steps are necessary or possible. The difference between the groups is great and it is at one and the same time a challenge and an enrichment. To be able to keep in touch by way of WhatsApp is marvelous. Barbara gave us a first introduction to the proposals of the assembly and then the group started examining the steps/decisions most important to us.

Pilgrimage of the CLM and the MCCJ

Bro. Hans, Fr. Günther and Willi gave us information over the pilgrimage we will have this coming September. Concrete proposals were made and have decided on the main points. There is room for 18 participants, registrations can be placed with Willi (CLM) or with Fr. Günther (MCCJ). After lunch we had enough time to enjoy the sunshine and walk around the lake of Wörther See.

Africa – A continent of Peace Initiatives

We gave a good amount of time to the continuation of our work connected to our peace project. The next step will be Bro. Hans’ conference at the peace center of Lindau. Together we prepared for him the basic idea and the methodology to be followed. The lecture will introduce the valuable experiences of the continent connected to activities of peace and reconciliation. The CLM will contribute a “Network of Places of Peace” (we shared the work for him).

Christof was our guide in a better understanding the pro-active pedagogy connected to themes such as globalization and peace.

Humans are meant for joy – joy is meant for humans

At the end of the day we reflected on a theme prepared by Franz von Sales on the “joy of our faith.” Joy is our Godly inheritance – the only one that can give us happiness. Joy has such a strong connection with our heart, that it cannot be at peace without it. God created joy for our own wellbeing. With joy, we await our next meeting in May (3-5).

June -That the Holy Spirit may help us to discern the will of God for our pastoral ministry and to be always witness of cooperation and communion. Lord hear us.