“The position of a missionary disciple is not the center but the periphery.”

I find myself in this immense periphery of Contagem since six months continuing the mission that Jesus has entrusted to us as CLM’s. When I came here I was scared thinking how I could help, because I realized that the community walked pastorally well, each area with its coordinator, everything flowed.

“But when we silenced the heart, God speaks!”

Of course there wasn´t monitoring for the possible vocation to be CLM, but as we know the winds are not to have many vocations, especially in this new context through which it passes our economy in Brazil. But when we silenced the heart God speaks! There is a saying of the Macua people of Mozambique that says: “Yakhala enokhala mmurimani, ekoma khoniwa” (When there is noise in the heart you do not hear the beat). Then, one beautiful day of prayer, I put myself in God’s hands and asked the Holy Spirit, with my permission, to place me at the service of the brothers in these outskirts of Minas Gerais.

Therefore it would be necessary to seek new skills. Then I studied Massage Therapy and got some notions of Biomagnetism with Father George and Regina who happily led me.

Today, attending people in the Comboni House and in the Study Center of the Sisters in Pampulha, I feel that I just need to surrender and the rest is up to Him. The Pastoral of the Child is also subject to this call, these days we are finishing a training course for new leaders, this time not so worried about the child underweight, but children with obesity from Zero to Six years old. Right now we are working with 8 groups, assisting 200 families and about 300 children are been accompanied by the Pastoral of the Child here in the area of the parish. In small gestures I found myself with the reality of people who seek happiness, health and safety, life in abundance!

The mission today is no longer just the desire to be a missionary, but also training for the rapid changes that are happening and we are not always willing to open our mind, sit down on the benches of the preparatory school to better serve the brothers.

Of course I could not stop talking about the Pope Francisco. I’ve been in Aparecida do Norte for a meeting of the Pastoral of the Child and I could see him pretty closely, at the feet of the patron saint of Brazil. And in the emotion of the words of our pastor I prayed for all who were lost in drugs, families and to have more vocations in the Church. Thus we continued to walk; together!

Pastoral of the child, Life Celebration, at the residence of Mrs. Zita, example of giving life to the people of Ipê Amarelo. Margaret and Silvia, after working all week, face a crowded bus because Ipe Amarelo is on the outskirts of Contagem, MG, the two find strength in the Love of Christ missionary and risen to celebrate life. This group also includes the participation of two more young voluntaries here in the neighborhood, Estefani and Deusilene, together they continue the proposal for a LIFE in ABUNDANCE.

HANDS THAT HEAL, THAT TAKE CARE, THAT BLESS YOU WITH AN OPEN HEART!

Therefore Father Jorge Padovan, Comboni missionary who celebrated the Eucharist, addressed the audience with words of encouragement and appreciation for the work of the Pastoral of the child.

The group also reflected on the importance of friendship with the families accompanied and with the integration into the health system of each community. To help pregnant women is necessary that the leaders are integrated into community health councils. Pastoral of the child is essentially a social control of the municipality! Action, Health, Nutrition and Social Commitment.

It is enough with some Cabbage!

Therefore, if we just encourage families to cultivate a small garden in their backyard this will already help to improve healthcare.

In defense of social and environmental justice in the lands injured by Vale. 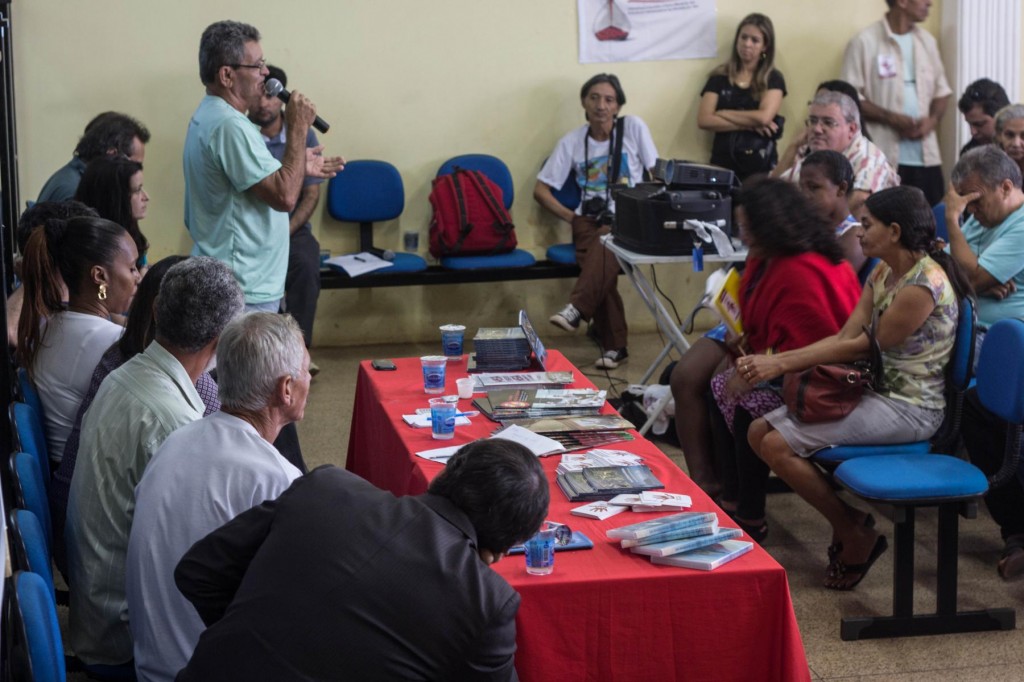 “I’m tired of holding this mineral train passing in front of my house ten times a day. I’m tired of hearing that this train of 330 wagons carried the wealth of our land and leaves a trail of abuses and deaths: one person every month! I’m tired of the speeches of the “wearing ties” of the company: they ensure that all this will bring progress, but for us, here, everything is stopped for more than twenty years! ”

This is the relief of several families living in the area of influence of the Carajas corridor (900 km railway between Maranhão and Pará, in northern Brazil).

Here, mining company Vale SA dominates the economy and controls the regional policy, possessing the richest and more abundant iron mines of the world and an impressive logistics system (railways and ships).

Vale is the second largest mining company in the world, operating in 38 countries has grown 19 times since a suspicious privatization transaction gave this treasure to private interests. It paints green and yellow its image, boasting its sustainability and social responsibility with powerful means of propaganda and influence on political parties, on the contrary, towns and communities around the world bear witness of the labor disputes (3,500 people in Canada have confronted the company with a strike just over a year!), pollution, discharges, corruption of local authorities, or even the use of militias to protect their private interests. In 2012, Vale was chosen in voting internationally as “the worst company in the world” (Public Eye Award, Switzerland).

Therefore, we consider this company as a paradigmatic example of the arrogance of many mining companies in the world. Since late 2007, a network of movements in northern Brazil launched the “Justice on the rails” (www.justicanostrilhos.org), to report conflicts with the multinational and claim social and environmental justice. Since then, participation in the World Social Forum in Belém strengthened the network of alliances and daring campaigns, allowing the birth, in April 2010, of the International Joint Affected by Vale.

Communities, social movements, workers and institutions, which in many ways are considered affected by the company, have been organized since the first meeting of the Joint International exchange of experiences and strategies of resistance and alternatives to the impacts of mining. The organization facilitates the exchange between people from ten different countries around the world.

Justice on the Rails also has close relations with the Brazilian Network for Environmental Justice and the Observatory of Mining Conflicts in Latin America. Since 2010 participates annually in the General Assembly of Shareholders of the Vale also leading to major investor the complaints and demands of communities.

A specific struggle front of the Network Justice on the Rails is to support the emblematic community of Piquiá de Baixo (Açailândia-MA), a victim of contamination from mining and steel. There, more than 300 families have had enough to live with five steel companies that have invaded the lands of the community. They claim for their resettlement in a pollution-free area, to live again with dignity and health. 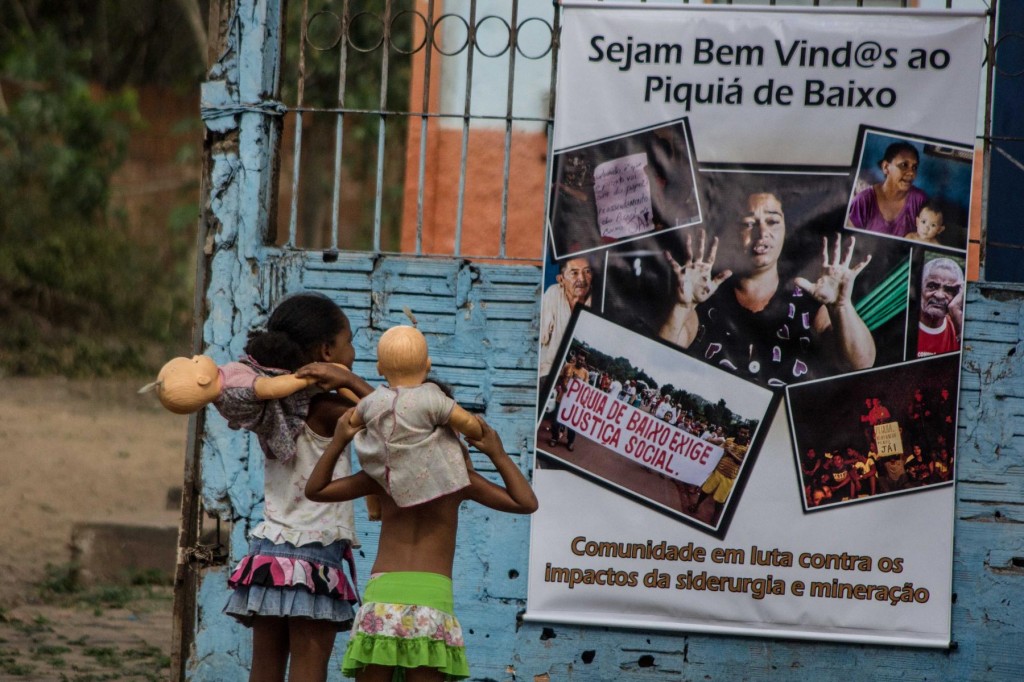 Piquiá de Baixo is one of the most serious cases of environmental racism and human rights violations in Brazil. In 2013, an international campaign launched a solidarity complaint for an urgent resettlement for the community.