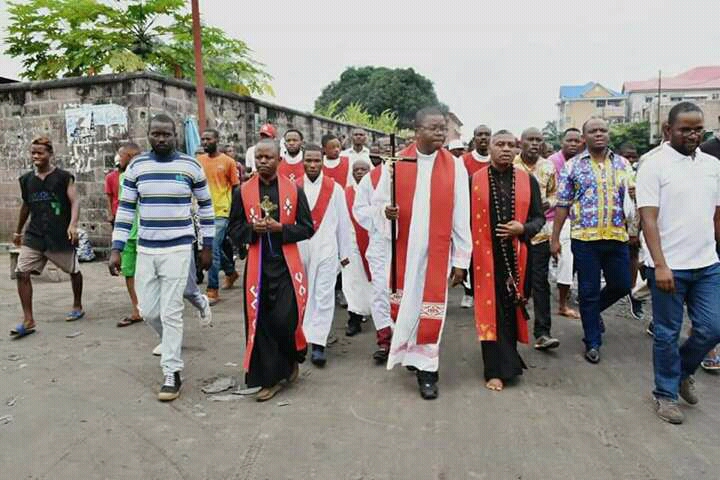 In Kinshasa, capital of the Democratic Republic of Congo, the peaceful march of the Christians was organized on January 19th by the coordinating committee of the catholic laity, for Sunday, January 21st, 2018. By this march, we demanded the government the unfailing application of the agreement of New Year’s Eve, December 31, 2016 as well as the respect of the constitution, pledge stability and national cohesion.

On Sunday, January 21, 2018, when we arrived in our parishes, we saw the strong presence of the Rapid Intervention Police (PIR) encircling our parishes. They were numerous and heavily armed.

At the end of Mass around 09:30 or 10, we started our peaceful march, they tried to disperse us from the first steps made in front of the door of our churches using tear gas and a real bullets… There were some wounded, one of the mates died on the floor after receiving two bullets on the breasts.   We were on the ground holding Rosaries, Bibles, crucifixes and twigs.   15 minutes later we were standing up to take the wounded to the emergency room.   In this huge crowd, facing our executioners, who was able to stand up, dusted our clothes and then continue walking.

There were police roadblocks everywhere at each roadblock, the violence and brutality were stronger, after 45 minutes of walking the police made a barrier in front of us pushing us to turn back, we sang hymns and the priest who was heading the crowd asked the faithful to kneel and pray the Magnificat. In this precise moment, when we all knee on the ground the police began to shoot and throw tear gas in these torrents of smoking they went against the priests, the acolytes and the young people who interfered to this arrest.

And during this time, in our parishes the priests had advised against the participation in walking to people who were very old or weak by illness or other reason as well as children.   They were supposed to pray a little while for those who were going to walk and get back home. However, the police imprisoned all these people in the parish; they forcibly closed from the outside all the doors of the parish obliging Christians to stayed in until 13:00.   All these weak people have remained more than 6 hours in the enclosure of the parish without water or food.

On the return of the faithful at the parish to close the march, we have found the Christians close in their own parish. When we attempted to break the padlocks set by the police, not only to release those who were in but also to entered and make the final prayer, the policemen started to shoot and abused the youths, there was a great clash for nearly 30 minutes. Then people would run in all directions always under police fire, trying to follow up on those who were arrested, those who were taken home injured, others were wounded and taken to hospitals… The day was restless until 4 pm and after it was cold and anguished, around 7 pm they removed their barriers. 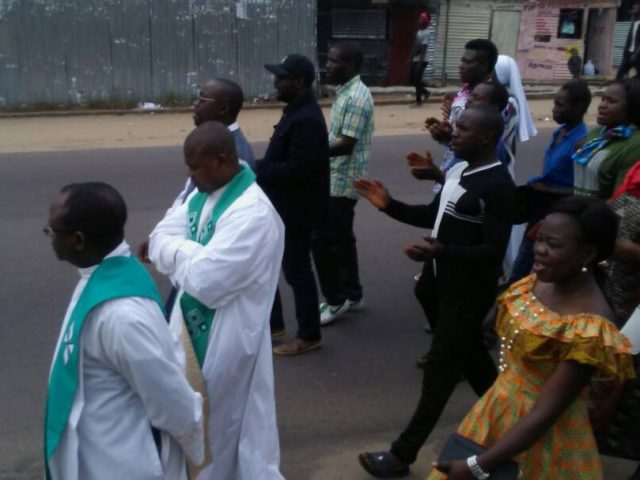 We leave here an email from Congo about the current situation in the country.

I did not follow up on the document I requested and I did not call you back because here the weekend of the 31st it was complicated for the Catholics because of the march of the laity against the political situation of the country.

In our parish during the 6 o’clock mass at which I participated, the soldiers entered the church at 7 am just at the time of the homily. They threw tear gas and put themselves in front of the exits of the church then shot with real ammunition. We were trapped in the church for 30 minutes. Then the priests organize themselves to keep us safe in the sacristy.

Then an hour after the priest took over the mass. We ended around 11am then we started our walk, despite the situation.

At every barrier we passed, the police tried to intimidate us with brutality to try to disperse us. When they got close, we knelt or threw to the floor and sang songs to Maria. They were trying to take part of the people and beat the group. After 45 minutes of walking, two military buses arrived, began firing tear gas and the air became unbearable. The shock was terrible. The priest stood holding the crucifix in his hand. They were heavily armed and they did not flinch. Then we prayed the Magnificat, when we finished the priest turned around and we finished the march in the parish st Charle Lowanga at 13h.

There were several wounded and some dead. I myself am wounded in the legs and therefore in medical rest since Monday.

Thank you for praying for our country, we have hope in you. 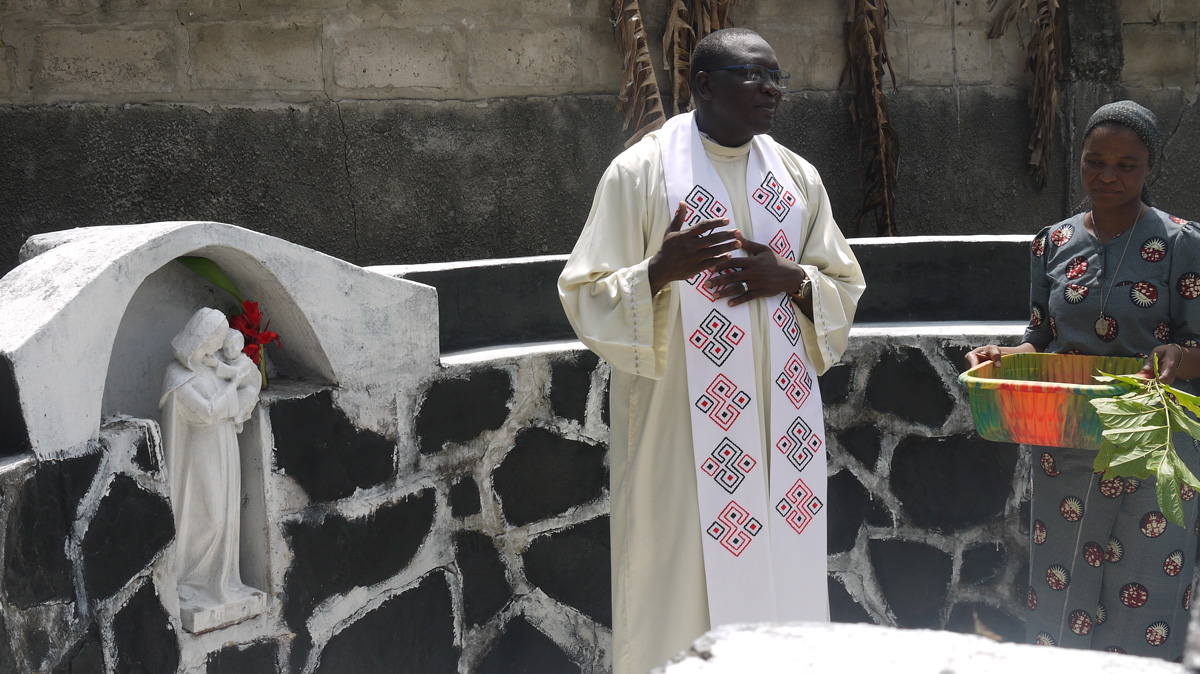 We start our celebration in the Orphanage Marie of Passion at  10:00 am.

The celebration of the Eucharist was presided over by Fr Celestin Ngoré, whose homily was based on, the mission, the gift of self.

After the celebration the sister in charge of the orphanage, invites father Celestin to bless the newly built cave, so we all went to the cave for the blessing, It was a moment of grace for all.

There was a prayer organized by the CLM, we went into a circle, hands in hand praying and asking the intercession of the Holy Virgin Mary, St Daniel Comboni, Blessed Anuarite and Bakanja in union with all the Saints of Africa, to say thank you to God for the gift of CLM in Congo. We entrust our lives in the hands of the Lord, that he, who was kind enough to begin this project, may continue to be the protagonist of our mission, may He gives each one the grace necessary to carry out the mission He entrust us.

We have prayed for the international coordination of CLM’s (Central Committee), the African coordination and all of our brothers and sisters on mission. May the Lord lead us, strengthen our relationship and make us a strong family, filled with love, a way of peace and a channel of His grace for His people.

We have also prayed for the MCCJ, thanks for their total support and welcomed us into the Comboni family and for all the time they have accompanied us, like a child that they give birth, they taught us everything and despite our majority today, they do not abandon us. May God fill us with his grace and blessings.

Pray for the orphanage Mary of the Passion that receives us, may the Lord help them so that they never lack anything.

We follow with the animation and cocktail with children; followed by a guided tour of the place. We finished the event at 13:00. 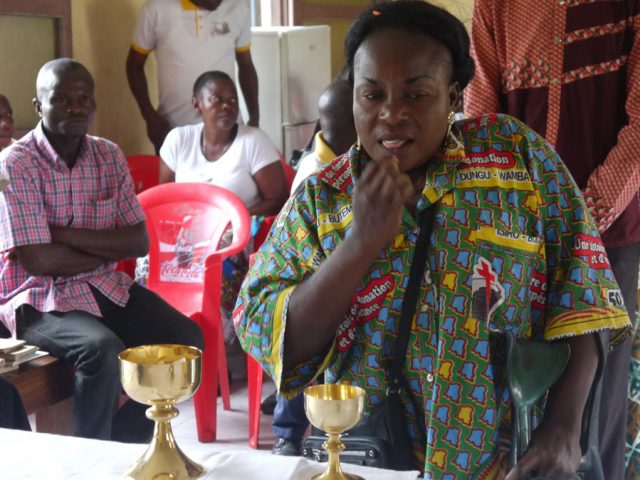 Today we put the conclusions of our meeting into solid concrete steps on the way forward as Comboni Lay Missionaries working on this beautiful continent of Africa. We all have different realities within our communities. Some have found it easy to collaborate within our communities, some have found challenges. There are communities that communicate well and understand the expectations of our family and the greater Comboni community, others have just understood how it all fits together.

This meeting has closed now, but through the Holy Spirit it has opened the eyes and hearts of all of us.  We are all stronger together, as one Comboni family. Our time in Anchilo has brought a continent of people all working to help expand the kingdom of God closer together. It has shown us our strengths and our weaknesses. We have put forth resolutions to make our paths more clear for all of us. These resolutions will help us all to understand deeper our vocation, our responsibilities, and the way forward in the spirit of St. Daniel Comboni.

Our meeting has brought forth the realities of our missionary vocation to the group.

We have discussed topics like communication, vocation, economics, formation and much more. Through these discussions we have found where we have met our goals, areas that we need to improve and the challenges we face in doing so.

Much like St. Daniel Comboni we have all found some difficulties in expanding the Kingdom of God. With the charism of our founder and intercessor, we find the strength to carry on in our mission and find the path to do so.

Like the palm tree bearing the coconuts fruit, it is not easy to share the sweet taste of salvation but we find the strength to climb, through our faith and our community.

July – That the CLM, in their forthcoming continental meetings, may allow themselves to be guided by the Holy Spirit and so respond generously to the needs of the people they meet in the various countries. Lord hear us.