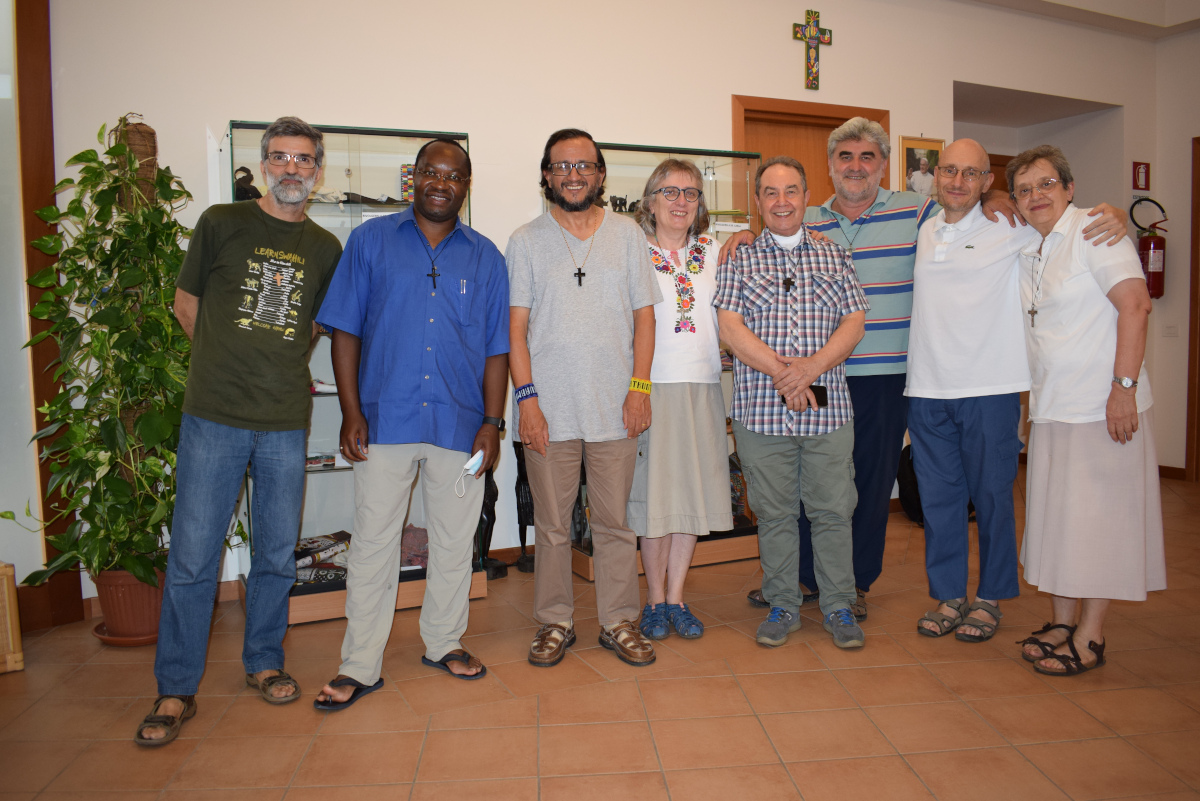 The Comboni Fathers and Sisters came to be because of the Plan of St Daniel Comboni to regenerate Africa with Africa itself. The Plan was first published in 1864, but was revised ad up-dated by Comboni himself as many as seven times: it was an inspiration from Above, the fruit of the compassionate love of the Good Shepherd for that Africa which Comboni called “The Black Pearl”; and also participation from below, with varied expressions of mission, strategies, the involvement of ecclesial groups, philanthropists, scientists and geographers, to provide personnel and funds to carry it out.

Comboni’s biographers recognise in him certain fundamental characteristics, among which his practical and dynamic foresight and his unshakeable confidence in the regeneration of Africa, despite obstacles, crosses, misunderstandings, criticism and calumnies; proof of this is to be seen in the fact that two Africans, Daniele Sorur Pharim Den (1860-1900) and Fortunata Quascè (1845-1899), both Sudanese and rescued from slavery, in the inclusive vision of the Comboni project, immediately espoused the Plan and, through their ministry, revealed its efficacy.

The first of the two described the true conditions of the Blacks and emphasised that the regeneration of the Africans could come about under two conditions: breaking the yoke of slavery and giving the Africans the same opportunities for education that were being given to all other peoples. The second dedicated all her life to the training and education of African girls, so that, once freed of all slavery, they would, in turn, set in motion processes of regeneration in the very heart of Black Africa.

For more than 150 years, the heirs of Comboni, enlightened from Above, with the same determination and confidence and moved by compassionate love for the poorest and most abandoned, gave form to the dream of regenerating Africa through social ministry, adapting the Plan to times and places under the breath of the Spirit who “renews the face of the earth” (Ps 103,30). Here we have an important patrimony to be known and valued, especially today, so as to oppose the system of neo-liberalism of rapacious predators which concentrates riches in the hands of a few and promotes the throwaway culture, excluding billions of people from a full life.

This is why this year, 2020, the year the Comboni Missionaries have dedicated to ministeriality, the General Administrations of the Comboni Family of consecrated, secular and laypersons, have asked for an ad hoc commission to publish a book containing stories of life lived in social ministry and, at the same time, to expand research by mapping our presences and commitments, involving the communities of the Comboni Family scattered throughout the four continents. It was proposed to:

This work was doubtless very ambitious, but, at the same time limited, in that it is always difficult to enclose in a document all the riches of what is lived. There is also an embarrassment of riches in choosing from among the experiences of 3,500 consecrated, secular and lay men and women who operate according to the Comboni charism, in Africa, in the Americas, in Asia and in Europe.

The book entitled “We are mission. Testimonies of Social Ministeriality in the Comboni Family”, was published in June 2020, in four languages (Italian, English, Spanish and French). The book is the fruit of the collaboration of 61 missionaries who were invited to tell the story of their lived social ministry; two external experts made a sapiential reading of the material, indicating the strong points of ministerial commitment and the knots to be undone for a more effective change to the system.

The narrations and sharing contained in this text help to understand that, though there may be a multiplicity of situations, approaches and initiatives, the social dimension is the horizontal axis of all ministry, in the sense that every service, understood as a gift from God, by its own intrinsic power, proclaims the liberation of the oppressed, “The year of grace” (Lk 4,18-19) and reveals to the peoples “a new heaven and a new earth” (Rv 21,1) in the original and providential plan of God.

The account of the praxis of social ministeriality, therefore, enriches the reference paradigm of the mission that is ever more incarnated in the complexity of the world of today and attentive to the signs of the times and places, so as to be able to re-announce to all peoples the faith in Jesus Christ, using appropriate languages and modes of presence.

The process under way will be long and gradual but it may avail itself of some themes and suggestions brought out in this and other sharing that will be expressed in the general mapping of the Comboni Family. It is also planned to have a time for recollection, deepening, synthesis, discernment and the re-launching of the Comboni Social Ministry in Rome, in December 2020.

The starting point is not mere emptiness or just theories but events that have been lived and narrated in the daily life of the Comboni mission; they may be summarised as follows:

Seeing: with “penetrating eyes and an open heart” to receive the challenges and opportunities for announcing the Gospel.

Being neighbourly: in the dynamic of a missionary Church that is “going out”, that lives in the peripheries and touches the wounds of the brothers and sisters, taking upon itself the odour of the sheep and the lifestyle of the poor.

Encountering: living and promoting the mystic of encounter. Professing catholicity and shortening the distance between faiths and cultures, by means of dialogue and ecumenism, towards global fraternity.

Regenerate: allowing ourselves to be challenged by reality and making ourselves busy looking for the five loaves and two fish of the little ones, the widow’s mite and water for the purification of the peoples.

Transforming: there is no more time for modifications; it is time for change! It is time to confront the causes that generate inequality between peoples and the throwaway culture.

Celebrating: All that gives consistency to social ministry and configures the men and women disciples to the Paschal Mystery of Christ which supports the faith in the daily life of the mission.

Setting out once again: Under the gaze of the Spirit, there is no longer room for self-glorification or vainglory; all is tested in the flames of the fire that purifies and moves to dare to set out once again, taking unknown pathways and roads since the ways of God are forever more and more.

The ambits of social ministeriality

The heart of social ministeriality is one that listens to the cry of the poor and takes their part so that their expectations may be met and make them capable of transformation; in the Evangelical logic of Our Lord: “Though He was rich, he became poor for your sake, to make you rich out of his poverty” (2 Cor 8,9).

As a Comboni Family, we have always worked in the social dimension: the formation of consciences and the preparation of professional leaders; media and communication; care and attention towards people, health and education; existential and geographical peripheries (e.g. caring for street children, situations of war and conflict, ethnic minorities; trafficking of minors and women; human rights; prisons, pastoralists…); human and pastoral mobility of migrants; protection of creation; liturgy and catechesis.

The process set in motion that places the emphasis on the social dimension of ministeriality cannot and must not be seen as an action that is limited in time. It is a long journey, according to the living tradition of the Church. It must be sustained, nourished and reviewed with the accelerated pace of epochal change, for the purpose of rendering efficacious and creative the missionary and charismatic presence of the Comboni family in the world of today.

Consequently, the social dimension of ministeriality invites us to review the idea of mission. This is an invitation to the Comboni Family to reflect on what it wishes to be and to accomplish for the good of humanity in the construction of the Kingdom of God. The guiding line is always the mission, with these particular characteristics:

This is the reason why the title of the book “We Are Mission”, becomes an appeal for a mission that is lived as communities of regenerated people and Comboni communion between sisters, brothers and laypeople, ever more articulated and interconnected with other groups and associations both ecclesial and lay, as an integral part of the people of God.

This process of change amplifies the Comboni dream of regenerating Africa with Africa in the perspective of the great dream of Pope Francis, expressed in his post-synod Apostolic Exhortation “Querida Amazonia”: a dream of the creation of a new society that includes the “rejected” and a new social pact for the common good. A cultural dream of pluralistic humanity; an ecological dream in which all is interconnected and the commitment to save the earth guarantees a future for all humanity. Finally, it is an ecclesial dream, well symbolised by the image of the “field hospital”, immersed in the life and the reality of the poor and marginalised, that touches the wounds of the brothers and sisters and pours on them the oil of peace and reconciliation.
Fernando Zolli and Daniele Moschetti

January –That our faith in Christ may move us all to be united in alleviating the hardship caused by the pandemic, especially among the poorest. Lord hear us.