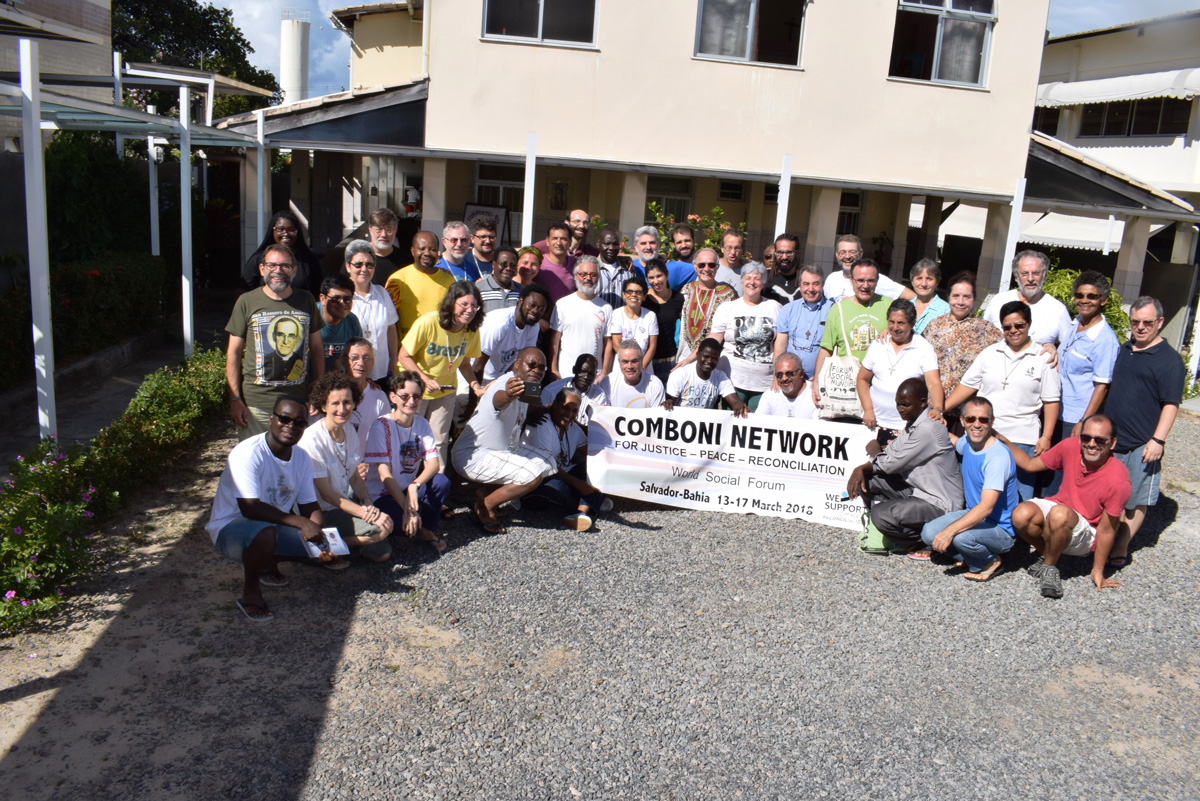 We, the Comboni missionary lay people, sisters, brothers and priests who took part in the WSF and the CF, greet you from Salvador, the land of black resistance and of Afro-descendant cultures, with hearts full of gratitude and hope. From the 10th to the 19th of March 2018 we lived together a strong and unique experience by attending the WSF, that had as a theme “To resist is to create – to resist is to transform” and the 8th CF on the theme of “Ministerial methods and networking/cooperation within the Comboni Family and with other organizations.” We thank in particular our general councils that together sent us a message of encouragement for our commitment to JPIC and for our participation in the WSF as an experience of how we live our charism in the challenges of today’s world.

Our participation was relevant and numerous: 53 members from Africa, Europe and America. We experienced the great richness of our charism in the variety of our commitments. For the first time representatives of our young people in formation at the scholasticate and at the CIF with their formator attended. We are also grateful for the answers we received from four scholasticates to the questionnaire sent by the central committee with the objective of understanding how much the JPIC themes are present in their formation. We also confirm our commitment to involve always more the people in formation and their educators in the themes of JPIC and in the dynamics of the WSF and of the CF.

In the WSF we, as Comboni Network presented four workshops: Land grabbing, Mineral extraction, Socio-political situation of the DRC and of South Sudan, and the Elimination of violence and gender discrimination. This allowed us to share our commitment as missionaries for the possibility of an alternative world within the methodology of the WSC. A stand, which we set up, allowed us to do mission promotion, to meet and dialogue with many people and be known. From among the many workshops offered by the WSF we followed with great interest the New Paradigms, Theology and Liberation, Youth, the Resistance of indigenous people and of Afro-descendants, Migrations. In the course of the Forum we also attended the women’s world assembly. The WSF took place in a festive climate, only interrupted by the killing of two human rights activists, Marielle Franco in Rio de Janeiro and Sergio Paulo Almeida do Nascimiento in Barcarena, Pará.

The CF took place under the sign of continuity with prior encounters. The days were marked by times of inculturated spirituality when we celebrated life, sufferings and hopes in tune with the situations of the countries we came from or encountered at the Forum. We reflected on the need to deepen our reflection on the new paradigms of mission, of consolidating this experience as a Comboni Family and give wider space for lay people to participate. In this reflection we were accompanied and animated by Marcelos Barros, who shared with us the current state of theology and liberation, and by Moema Miranda, who after an analysis of the world’s situation, proposed some sources of light for the journey as proposed by Laudato Si´. Faced by a neoliberalism without limits, the invitation consisted to introduce the poor to dialogue and to strengthen the faith in the presence of the Spirit of God who walks with us through history.

Stimulated by what we have experienced we propose to:

After this experience, we realize all the more the importance of meeting again for a greater cooperation within ourselves, to face one another as Comboni Family and as people busy in different fields but united in our commitment to JPIC to look for new ways to minister and new paradigms of mission.

November –That deceased missionary women and men may enjoy the peace of the encounter with the Lord whom they proclaimed to the world during their earthly lives. Lord hear us.