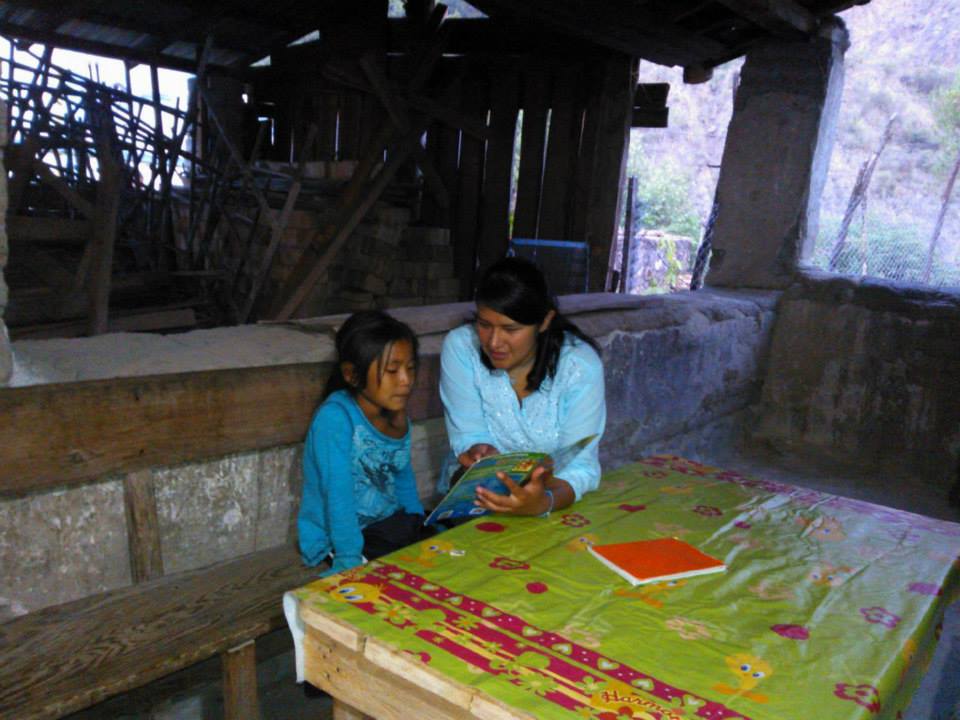 The answer is a bit complex, for now I will just tell you what Caro and Mine (two CLM) do in the mountains of Guerrero, in Na’Savi culture, officially known as Mixteca.

They are located in the village of Huexoapa, in the municipality of Metlatónoc, and the parish of San Miguel Archangel, Diocese of Tlapa. In Huexoapa live about 200 families, their language is tu’un savi or Mixteca, although some also speak Spanish.

The CLM have a missionary presence in this town for six years, eight have been the missionaries who have served in this mission, in different periods. Each has shared part of their being, their knowledge, their faith with the people and in turn, the people with them.

Caro came to this mission in September 2014 and Minerva in February 2015 to take over the companions who were there. God willing, they will be for three years in this town. Although the time they have there is not enough to know and understand all the wealth and weaknesses of the culture they have tried to assimilate what it has been possible for them, feeling part of the people, enjoying and appreciating the good in it, and contributing to build a better place, each from their skills and knowledge.

Caro offers evening classes remedial education, for the moment 19 children of various grade levels are involved, and she take care of them at different times. The support is reduced only to read (12 children) and mathematics (7 children) primary level. It is very probable that the number of children increases, as more and more people are interested and come to her asking her to “help them to study.” Minerva teaches knitting and sewing, but now informally, since she just came to the place, the ladies are just beginning to learn about their work, but those who have already approached have shown great interest, and not only ladies but also some of the young, who learn very easily.

Other activities they perform, is the accompaniment of children, youth and adults participating in some pastoral activities, such as support for the three catechists of the community in the preparation of the catechism for confirmation, first communion and presented sacramental talks; weekly meeting with young people in which human and Christian formation occurs; formation in values and catechesis to children; Holy Hour on Thursdays; support in the preparation of the Liturgy of the Word to the young person who is going to chair, or in the organization of the liturgy when they have Eucharist, which is most of the times. They are also having guitar lessons, and have a quasi choir, two mandolins, a tambourine, three guitarists (two women and a man), and two more persons interested, but they have failed to learn because of lack of instrument, although all are just learning, they are encourage to play some songs at Mass or at the Liturgy of the Word.

Also they spend one day a week to visit families so we can know them more closely, some of the time accompanied by a young or a child from the community that helps as a translator, since they do not speak the local language, and not all families speaks Spanish. They are striving to learn, both in daily life, trying to memorize the words that people taught, and in the hours they devote to study, with the help of a young lady from the village.

They are also trying to cultivate a small orchard, on the back yard that is part of the house that the community gives them to live. For this, as for other activities that they perform as well as the needs that are presented to them, they have the support of the people involved in the above activities and who do willingly.

Caro and Mine know that work is hard and sometimes things do not go as they wanted. Although there are many the signs of life found in this culture, there are also present signs of death, coupled with this their personal limitations and defects, however they know that “the works of God are born and grow at the foot of the Cross” (St. Daniel Comboni).

Being with this people they realize that they receive more than they give, but I will speak on that subject later.

I conclude making you an invitation to join in the building of the Kingdom of God, from what you feel called to provide: counseling, financial support, prayer, giving part of your time or giving your life to the service of the mission.

“The harvest is plentiful but the workers are few” We have lack of you!

1 thought on “What are the Comboni Lay Missionaries engaged in?”

March – That, in their ministry, women may continue to offer support to families and create a sense of belonging in the communities where they live. Lord hear us.