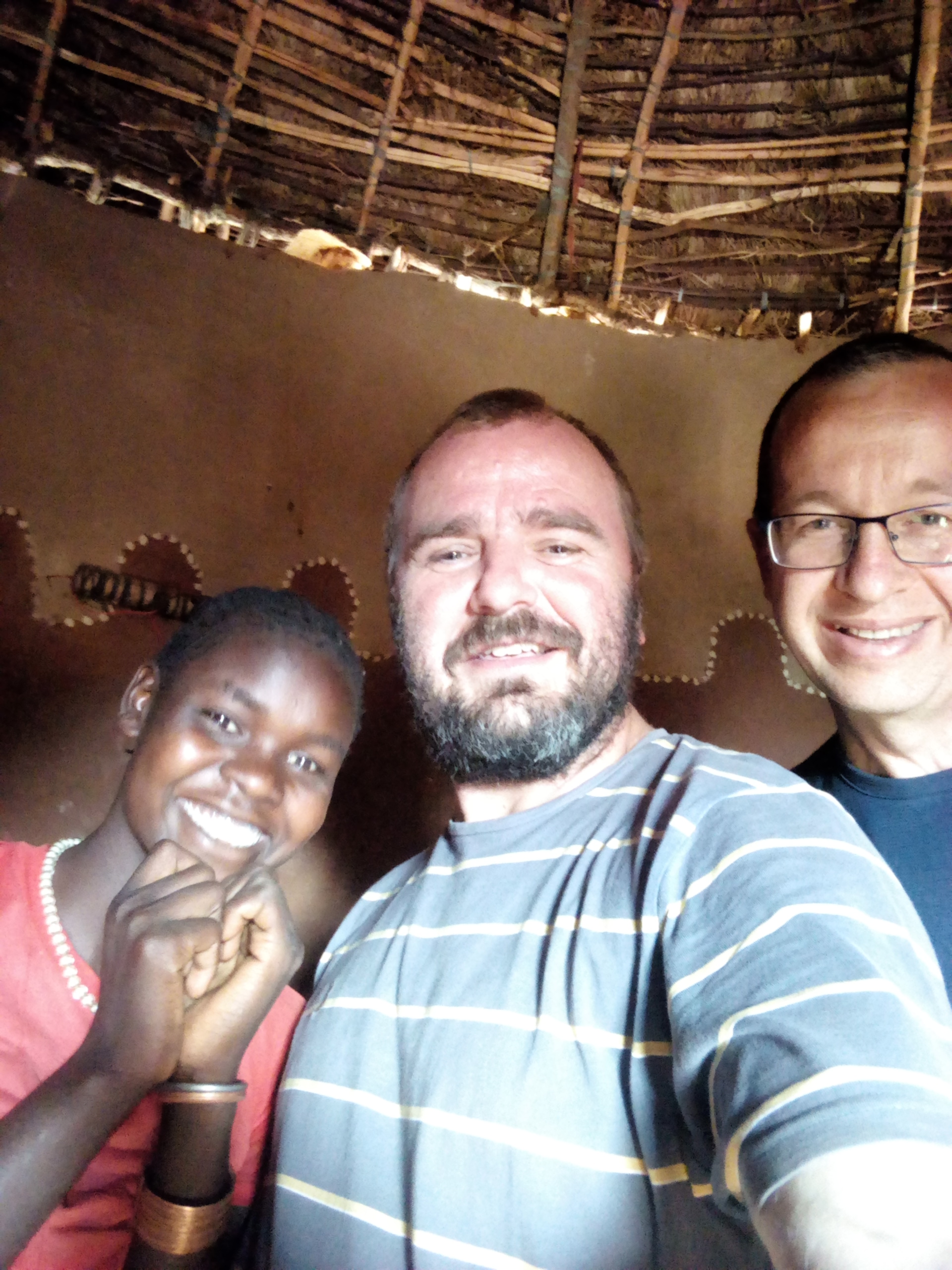 I do not want to end this series on my visit to Kenya without telling you about my brief visit to West Pokot.

It was going to be a much longer trip but, due to unforeseen events that never fail to materialize, we had to cut it short and return to Nairobi. In any case, the trip was intense and interesting.

I traveled with Fr. Maciek and Bro. Cesar from the community of Amakuriat.

It was a 15-hour trip in a Land Cruiser that turned out to be a little crowded for the three of us, but that we shared joyfully.

As usual, the vehicle was loaded up to the top, as it is normal in the missions to take advantage of each trip to buy what cannot be found in the bush, both for your community and also for the other communities in the area that also need help. So, it is normal that a missionary’s car will fill up any time it goes from one place to another.

And why not, we even had time to stop for some visits along the way and deliver some messages as we did with the bishop. We did not see him because he was elsewhere, but at least we signed the guest book of the diocese.

We left at 6:00 in the morning and arrived at the mission compound at 9:00 in the evening. The truth is that for the most part the road was not too bad, but traffic slowed us down. The last few hours were on a dirt road that made us understand how, as we left problems behind us, there were many more ahead. There was an especially complicated stretch of about a half hour where it would have been nice to have a 4×4, because the rain had left the road in a sad state with pits and stones. Fortunately, it had not rained too much and the road was not blocked by some of the rivers like when it rains a lot and there is no way to enter or leave the area for hours or days.

The next day, after eating with the community, which welcomed me and made me feel at home, we visited the “business area’ of the town and, in the afternoon, some Pokot communities.

This is the community where Fr. Tomás Herreros had worked for many years. He was provincial in Spain when we were getting ready to leave for the missions, and I had listened to his witness of life among the Pokot which now I could see in person in this mission. He is most certainly well remembered and cherished and has left a great legacy among his people.

The village of Amakuriat is not unlike any other African village, with its little stores, a small hostel and some local restaurants where to eat.

To walk through the streets is a slow process because every five minutes you bump into someone who wants to greet Fr. Maciek, ask questions, exchange the time of day or agree to get together later to talk.

This parish is a possible place where we could be if some day we will have sufficient personnel to open another missionary community in Africa. And that is why it was important to see it.

In the afternoon we visited a couple of traditional Pokot villages. It is always a wonder to see how they keep their customs, their buildings and way of life. Even though there are schools in the area, a lot remains to be done. Education is the door to the future and to the development of people here that are still living as they did centuries ago. Cattle is still the main source of wealth, polygamy is still prevalent and the work of women to sustain the family is still central.

To get to the villages can be difficult, through tracks that have to be picked among the acacias and that makes us stop now and then to engage the four-wheel drive to move ahead.

We were able to visit a few villages and, as always, we were amazed by the welcoming and kindness. Whatever little they have, they share it and so they did with a coup of milk from their own cows, slightly fermented already because they have no refrigeration of any kind and keep it in a bowl. They cook on a wood fire, sleep on cow hides or on rudimentary beds, without light or drinking water, all within a corral enclosed by thorny barriers to protect themselves from hyenas. This is how they still live. Fortunately, they tell me that the area is now at peace and they no longer suffer cattle raids from the Turkana, their northern neighbors, that also used to cause death because of mutual conflicts.

The following days we visited another sector of the parish. It is a parish with three sectors that could mean eight hours between the far end of one to the other, on dirt roads and where the missionary sleeps at times in a little room next to the chapel or on the ground in a sleeping bag.

Chelopo gave us the chance to rest a while on the return trip to Nairobi. We stopped briefly with the youth group and we were overwhelmed by their initiatives. They would like to have a volleyball court: they already have the net and all they need to do is to clear the area and bring cement for the posts, then they will organize a tournament with young people from the nearby communities. They would like to take some old computers from the school’s warehouse, put them in the hall and try to learn how to use them, get together with other groups and see if they can help the community. It’s summer vacation time here and they have a lot of free time.

These are young people with a spirit of initiative and the will to do things.

We then continued our journey. Bro. Cesar took us to a town to catch a night bus for Nairobi with which to end our lighting speed trip to the North.

By 5:00 in the morning we were already in Nairobi and from the station we went to the provincial house to see a number of missionaries who were gathered there or passing through, to speak with the provincial over our experiences and to rest a while.

It was a quick visit, but a very interesting one. Who knows whether in the future there will be a CLM community in this area. For sure, it is a very beautiful mission and with many needs.

3 thoughts on “Visit to Amakuriat”