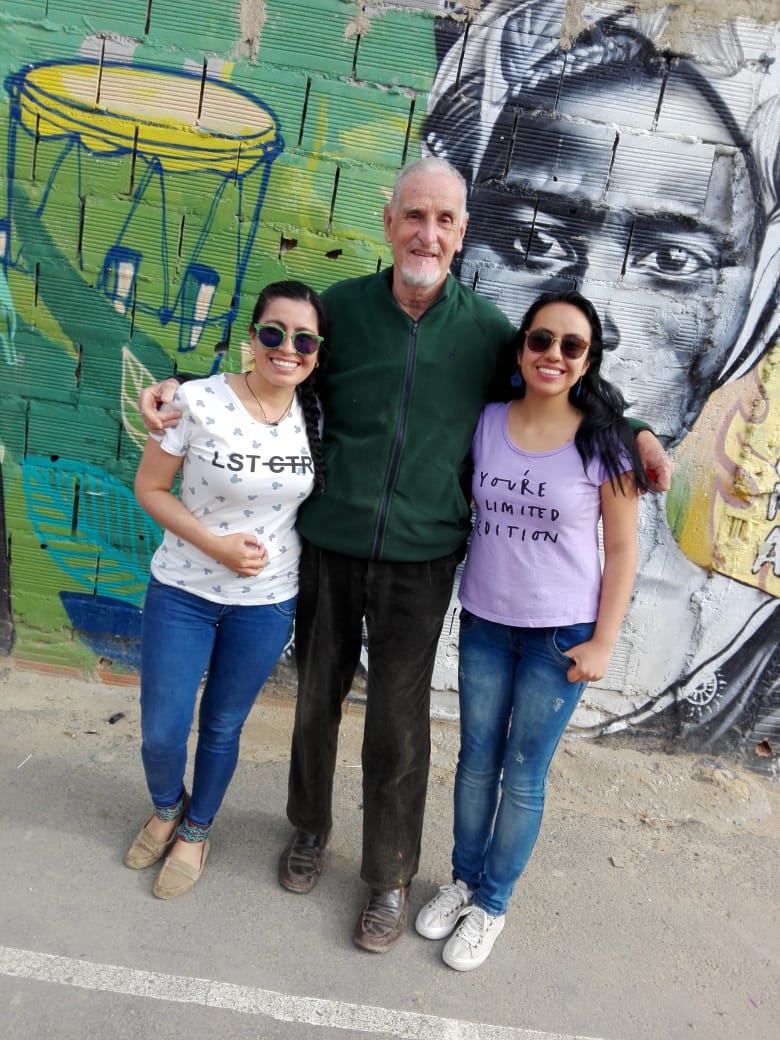 The year 2020 began with our presence as Comboni Lay Missionaries of Colombia in the neighbourhood of El Oasis, on the eastern outskirts of the municipality of Soacha, near the city of Bogotá. The Comboni priest Franco Nascimbene has been working there for five years and we are now sharing our experience of immersion with him. During this time, as a team, we have been thinking of ways to accompany all those affected by the current situation of COVID-19.

At the beginning of the quarantine we asked ourselves about the meaning of our presence in the middle of the community, since given the indications of the government we all had to be at home, temporarily suspending the pastoral activities planned for the year (catechesis, afro choir, eco environmental project and afro group).

Especially since we are in a neighborhood where the majority of the inhabitants depend on informal work and which is made up of minorities such as migrants (mostly Venezuelans) and those displaced by the violence of the departments of the Colombian Pacific. Although the incidence in terms of health has been minimal for the inhabitants of the neighborhood meanwhile there are no reported positive cases of people from the sector, the social and economic impact has brought an increase in the situation of poverty and in the guarantee of basic rights such as food, housing, health, recreation and education among others. When analyzing this reality as a team, we observe that the presence of the state continues to be minimal, and the food aid that has arrived in the neighborhood is not enough to supply basic food for the families.

Facing this reality, the following significant experiences have arisen and we would like to share with you, full of great joy:

Community prayer in the stable: During the first week of quarantine, during the prayer of the Comboni Missionaries’ team, the idea arose to share moments of prayer that would allow the people of the stable to generate more solidarity and hope. This idea was shared with neighbors from another church (evangelicals) who live on the same street and who joined the initiative. From the second week of quarantine onwards, this idea was born:

This experience, which we continue to live, has allowed us to get to know our neighbors, since for reasons of study or work, it was not possible for us to share these spiritual and community moments. In addition, two people have committed themselves to prepare the prayer every week, and from the second week onwards, a sound system and microphone are loaned out, with the participation of people from other streets. The most important thing is that from this community act, solidarity is experienced among the people who contribute with some of their food to benefit two families who need it every week.

Solidarity sharing: at the same time that we were asking ourselves as a team about creative ways to help our neighbors, we unexpectedly began to receive messages from people close to us, such as friends or relatives who, from Bogotá, were concerned about the situation in the suburbs. Then it occurred that we become bridges that would allow economic aid to reach them.

The first two weeks we went to the nearby supermarkets to buy supplies to help some previously known families. From there we focused on the people who would benefit from this aid with the collaboration of some Afro leaders with whom we had been working. We thought about the afro population that as a consequence of the quarantine have been left without jobs. That is how one afternoon we shared around 40 markets among our black brothers of the sector. Markets have also been shared with migrants, older adults, recyclers and mothers who are heads of households.

The tenderness of the poor: In Father Franco’s house, a table was set where each person could take 3 foods that they needed or leave something that they wanted to share. From this initiative, many small gestures of solidarity emerged, where those who had something else shared it with someone who needed it more, for example: 5 eggs, a pound of tomatoes, a package of rice. People who got help shared part of what they received with those who had more difficulty than them.  Currently, Father Franco spends his afternoons visiting different families in their homes to get to know their reality. In this exercise, he has met people who, having enough, have invited him to share with others who really need it.

As a team, we have been part of this experience of cooperation, we have experienced the joy of receiving food from people close to us, many times we have given what was due to us by emptying our hands but seeing how this giving multiplied into a new receiving.

Now we find ourselves thinking about how to support the academic process of the children, since with the strategy of distance education those who do not have an internet connection and the economic possibilities to pay for the copies they require, have been excluded.

United in prayer and mission from Colombia,