The Comboni Lay Missionaries in Brazil is a group of single and married people who live the Comboni spirituality and form apostolic community. They work in the announcement of the Good News "ad gentes", witness with their life among the people to whom they are sent.

The missionary service for a challenging reality requires a serious preparation. The training, indispensable for all, is a continuous and integral process: with moments of study, questioning, courses, accompaniments and evaluations of the different stages. It is expected a minimum of 1 year of community experience for those who are preparing to leave for the first time.

The funds necessary for the support in mission come from the professional work of its members. For foreign missions these resources are estimated in the contracts of mission. The project also has voluntary contributions from friends and benefactors, and from mission support groups, who are people that share a commitment to encourage mission into the local Church, encouraging vocations and promoting economic aid. The funds are administered by the Comboni Lay Missionaries Association (ALMC), non-profit organization that represents legally the CLM in Brazil.

The CLM share the spirituality of the Comboni Family (Parents, Brothers, Sisters, Secular and Lay). The source of the Comboni spirituality is the mystery of the pierced Heart of Christ the Good Shepherd. From this charisma the CLM seek in the Mission "ad gentes” the evangelization and human promotion of those who are far away in faith and geographically. At the service of the poor and most abandoned: with a preferential option for the least in society and those in the most difficult places; "Save Africa with Africa": a methodology that promotes the role of those who are the cause of the mission and is based on dialogue and animation of the people of different cultures; The works of God are born at the foot of the cross: acceptance of the inevitable difficulties that commitment and choice entail. 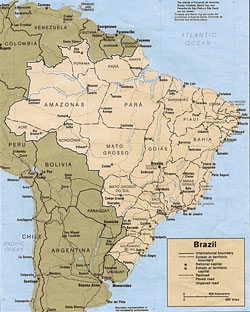 Principals ethnic:There are countless races that favored the formation of the Brazilian people. The main groups were indigenous, African and European immigrants.