Current state of the CLM in Togo-Ghana-Benin

Today, the Contribution of the Laity in the evangelising work of the Church cannot be anymore neglected. And the birth of a branch of Lay Missionaries in the Comboni family is a sign of renewal and growth; a sign of openness to the Spirit that is the sole Protagonist of the mission. In our province of Togo-Ghana Benin, we are happy with the recent moves that are taking place in view of laying foundations for an Association of Lay Missionaries according to the recommendations of Ellwagen and Layibi. The history of the Province records the incredible assistance the first missionaries got from lay people, especially the catechists and the catholic teachers.  They tirelessly worked along with the expatriate missionaries not only in the field of translation, but also in bearing witness to the Good News in their little way. This fruitful collaboration is still on, but does not bring the Comboni missionaries and the lay collaborators together as sharers of one common charisma.

In 1999, the idea came to create some sorts of structure that can bridge up the gap. Parents of radical confreres and friends from our parishes are the target groups. The response was positive, giving birth to an association: ‘Amicales comboniennes’ in Togo-Benin, and ‘Friends of Comboni’ in Ghana. They are to play their part in the missionary work, both spiritually and financially. The movement quickly expands from urban parishes to the rural ones. Each group is led by a lay leader, even if a Comboni priest (usually one in charge of mission animation) is assigned to accompany them. They have to be instructed about the Comboni charisma, his life and vision. They hold monthly meetings for formation and  to plan their activities . They gather in groups called ‘Cenacles de prière’ and pray for missionaries and their evangelizing work.

They help in mission animation by selling the magazines (‘Afriquespoir’ in Togo-Benin, and ‘New People’ in Ghana). They share in the preparation and the celebration of the Comboni feasts, vows and ordinations.

Despite, such praiseworthy commitment of the ‘Amicales’ and ‘Friends of Comboni’ in the province, they never succeed to engage in the financial aspect of the mission, be it in helping their own children in mission abroad or in affording to pay the expenses of their own activities. They often fall on the Comboni religious communities for financial help. Hence, they soon become an unbearable burden for the province. Sadly, this will lead to a temporary suspension of their activities since last year. The Provincial council has asked the Secretariat of the mission animation to look for new ways of restructuring these existing groups or initiating a fresh movement that will be truly self-supportive in all aspects. They will beneficiate of the spiritual assistance from the Comboni religious communities. Could this crisis be a chairos for the implantation of the CLM in the Province.
As a province opened for the longest time to the visit of many lay missionaries, (there was a group of CLM from America in Ghana from 1997- 2002), the idea of CLM is not be a brand new reality. Already, the old groups of ‘Amicales’ and ‘Friends of Comboni’ constitute a favourable ground for the setting off. Talks and reflections are already underway. In February 2012 (3rd and 4th), Fr. Abel Gueli (from the Mission Animation team in Lome) and Mr. Justin Nougnui (lay, ex-Comboni Student currently in Ghana) introduced the ‘Amicale’ of Lome to the new perspective (CLM).

In 2011, one (1) Comboni priest (Fr. Joe Rabbiosi) and one (1) lay man (Mr. Justin Nougnui) represented the province at the Layibi Meeting. We could not make it to Portugal last December due to our unstable condition by then.

Each year a report is given to the Provincial Assembly of the MCCJ, whereby the in-charge of the Lay projects (Fr. Joe) presents the new developments regarding the movement.

In Ghana, within the parish of Mafi-Kumase (run by the MCCJ), we have started a new experience. Some youth are being helped by the mission in order to reach financial autonomy. They are offered scholarship to the tertiary education, mostly the teacher’s training colleges. They are expected to be of a great help not only for themselves but also and especially for their own communities in playing key roles as lay leaders. Those who are professional already are involved in the formation of the younger ones. Ahead of the entry into the tertiary education, just after school, a full year is dedicated to community service. In groups of three or four, the youth subscribed to the programme are stationed in various villages of the parish. There they teach at school, animate and lead the Christian community in her liturgical celebrations; they teach catechism and see to the growth of the community. Meanwhile they try to lead an exemplary life as role models for their younger generations. It has been so far a very much appreciated experience both for the youth themselves and for the hosting communities. We see this clearly as responding to the call of St Daniel Comboni to ‘SAVE AFRICA WITH AFRICANS’.

The NGO, In My Father’s House (Abor/ Ghana), is the outstanding Centre to become the Headquarters of the CLM of the Province, since it is from there that most of the new ideas are radiating to reach all corners. The centre has already hosted plenty of lay volunteers from all over. Among others, we can mention the Polish group that visited us last September (2012). Fr. Maciek (mccj) led a group of eight young men (3) and ladies (5) with different professional qualifications to Ghana. It was a rich experience for them and for us. A few months after they left, he (Fr. Maciek) sent another young man (Jasiek) under the same umbrella.

We are grateful to God for these encounters, which have boosted up our desire for the foundation of our own lay association. Of course, the wish alone is not enough; we need to get to the action. In that regards, a small group of young professionals (previously supported by the mission) have formed an association named ‘PROMISSIO’ (Professionals for Mission). They are slowly but surely moving up to something. Could that be the stepping stone? Only God knows but our hopes are there to see such a beautiful dream one day come true! Needless of expressing our need of prayers and support in our struggle as we open our doors to more experienced CLM to come and strengthen us! 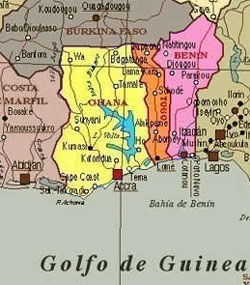